Predictions hot off the Algorithm and straight to your inbox

See the Algorithm's tips for upcoming matches relative to the bookies odds. Monthly access for just £9.99.

Think you know better? Can you outsmart the Algorithm over the course of a season?

Are you a podcaster or a journalist? Would you like more information on tournaments week by week to fill your column and show?

England come into the tournament as the defending champions and looking for an unprecedented third title in a row. With only one defeat in the past two years (to Ireland in the final game of the 6 Nations last year), are England fans right to expect another smooth path to victory? 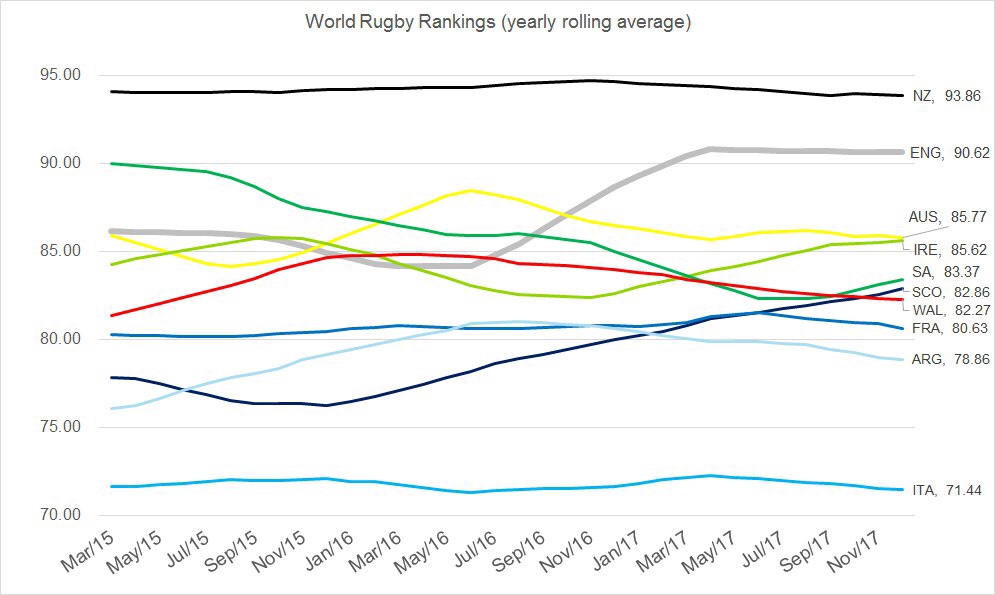 In a word, probably. England alternate ‘easy’ years and ‘hard’ years in the 6 Nations – essentially dictated by where they play the two other common title contenders, Ireland and Wales.

This year is an ‘easy’ year. England have these two hardest fixtures at home in Twickenham. Home advantage is incredibly important in rugby (a piece on that is to come) and because of that, England are clear favourites to win both those games and take a third straight 6 Nations title with a Grand Slam. We make it that England have a 59% chance of winning the tournament, and a 33% chance of a Grand Slam.

However, will it be that simple? This will be the fifth time that a team has gone for a third successive title, with the closest team to achieving it being England back in 2002, coming second to a French Grand Slam. Every other time, the defending team has come third, with three or fewer wins, so the weight of history is against England in this regard.

England’s toughest game is actually predicted to be away to Scotland in Murrayfield, with the current scoreline predicted to be just three points in England’s favour. Also, it is worth pointing out that should Scotland buck the predictions and win their opening fixture against Wales, this game is then predicted to become even closer – a real nail biter.

However, should England win that fixture, we are reasonably confident in predicting they will arrive at week five with four wins from four bringing up a likely Grand Slam showdown with Ireland on the 17th March. A mouth watering prospect for St Patrick’s Day.

Our model suggests England will win that game comfortably but we think it will be a little closer than predicted given the importance of the match. With England’s home status however, it is more likely than not they will walk away victors and take an unprecedented third successive 6 Nations title.

See where the best bets are for this weekend, comparing our predictions to the Bookies' odds.

We use cookies to ensure that your experience on R4C is the best it possibly could be. By continuing to use the site, we assume you are happy with that!OkPrivacy policy