Predictions hot off the Algorithm and straight to your inbox

See the Algorithm's tips for upcoming matches relative to the bookies odds. Monthly access for just £9.99.

Think you know better? Can you outsmart the Algorithm over the course of a season?

Are you a podcaster or a journalist? Would you like more information on tournaments week by week to fill your column and show?

So, Round 2. Apologies for the delay, I’ve been very busy this week.

The line up is a repeat of last week’s fixtures but in opposition territories. New Zealand v Australia in Eden Park, Auckland, and Argentina v South Africa in Mendoza. So what’s the history and what’s going to happen? We’ve got it all below, take a peak and see.

A comfortable New Zealand victory in their strongest of strongholds, Eden Park. However, the Argentina v South Africa match looks relatively close, and with Argentina due a resurgence … well perhaps it could be close. A good one to watch perhaps.

The title chances have swung ever more heavily in New Zealand’s favour, currently we make them to have a 97% chance of taking the title, up from 93% last week, and a 70% chance of the Grand Slam. Australia’s loss to New Zealand has swung the second place honours into South Africa’s hands, but this is more by virtue of the order of the fixtures.

Australia look for revenge for last week’s defeat, this week travelling to Auckland, a place that New Zealand haven’t lost for 24 years, their last defeat there being France in 1994. Australia are the the team with the most wins there – four – but given the last of those was in 1986, it is felt it is unlikely to occur again on Saturday.

A win for Australia would be momentous, clearly. An away win in New Zealand, their first since 2001 in Dunedin, would gain them maximum ranking points and have them overtake Wales and England and climb into third place. New Zealand would remain in first, just over two points ahead of Ireland.

To be able to churn out such consistent results is amazing, but all these runs must end somewhere; everyone loses eventually. However currently, it is beyond the abilities of our Algorithm to predict it. Statistically, the All Blacks are just too strong, and our computer has them to win everywhere they play. The closest anyone is predicted to come at the moment is Ireland, at home, with a 8 point victory currently forecast to the All Blacks. This match is lined up for the Autumn Internationals, so it will be interesting to see how they get on. Definitely one to watch.

This match could be interesting. Argentina will be looking for what would only be their third win in the past two years and their fourth ever in the Rugby Championship. They made an impressive start under new coach Mario Ledesma, and were leading the Springboks at half time. However, they faded in the second half and, in the end, the South Africans came through. 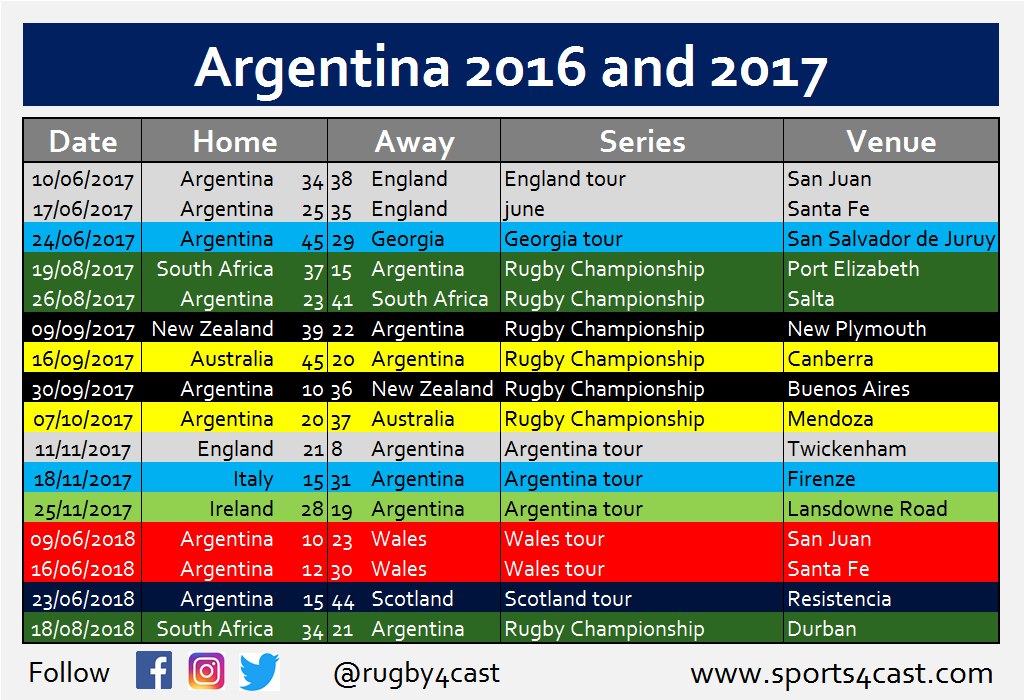 At home however, the Argentines may fancy their chances. Our Algorithm gives them a 33% chance of victory, despite their woeful recent run, and with the new coach and home crowd, perhaps that could be bumped a little higher. The South Africans don’t have particularly good away form either, only three wins in the past two years, so there is certainly something to play for. Perhaps finally some of that Jaguares form will leak through to the Argentine international side and challenge the Springboks. It could be a good match to watch.

BEAT THE BOOKIES USING OUR AI

We use cookies to ensure that your experience on R4C is the best it possibly could be. By continuing to use the site, we assume you are happy with that!OkPrivacy policy